STUDY - INTO THE LIGHT 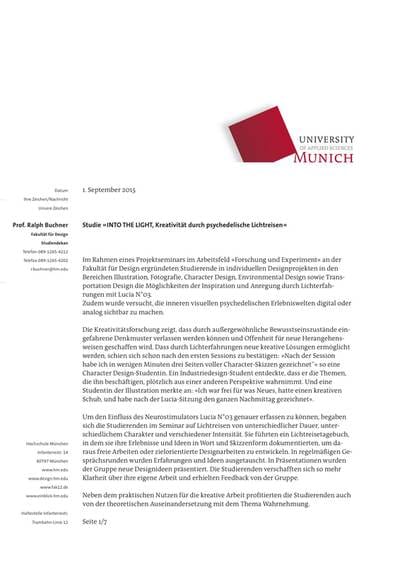 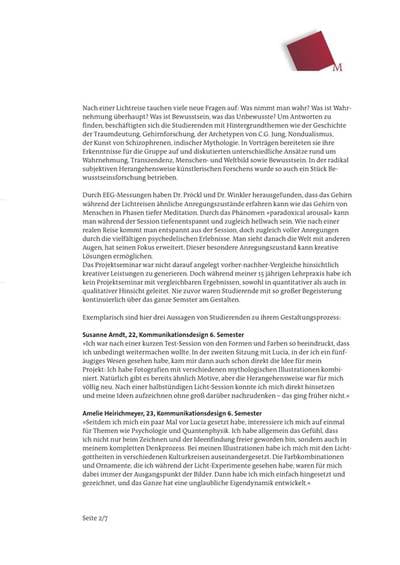 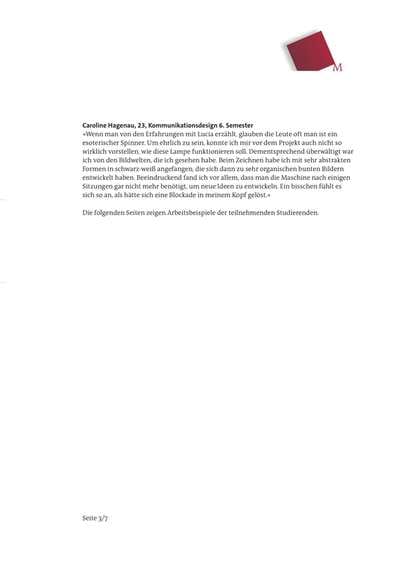 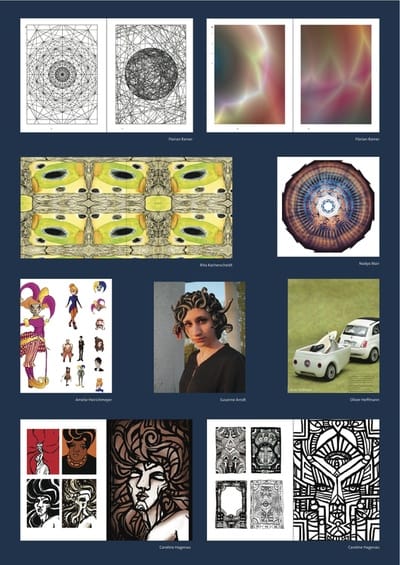 Translated from German
University of Applied Sciences, Munich
Prof Ralph Buchner
As part of a project seminar at the Faculty of Design a study was conducted : "INTO THE LIGHT, creativity through psychedelic light travel” with students from the fields of Illustration, Photography, Character Design, Environmental Design and Transportation Design to explore the possibilities of inspiration and stimulation by the Lucia N ° 03.
In addition, an attempt was made to make the internal, visual, psychedelic adventure visible through digital or analog means.
The creativity research shows that by achieving extraordinary states of consciousness, one’s thought patterns can be challenged and an openness to new ideas achieved. It was confirmed after the first few light experience sessions that new creative solutions are possible after exposure to the Lucia No.3 light machine.

Student feedback
A character design student reported "after the session I drew in a few minutes three pages of character sketches". An industrial design student discovered that his perception of the issues of concern to him, he saw suddenly from a different perspective. And a student of Illustration commented: "I was open for something new, had a creative thrust”

In order to understand the influence of the Lucia N ° 03 in more detail, the students conducted sessions, varying in character, length and intensity using different programmes. They had a light travel diary, in which they documented experiences and ideas in words and sketches, from which to develop free-style work or goal-oriented design work. Rounds of talks were held after regular Lucia experiences, ideas were exchanged and the group presented new design ideas. Students procured more clarity about their own work and received feedback from the group.
In addition to the practical benefits for the creative work, the students also benefited from the theoretical analysis of the concept of perception.

After a session many new questions arise: What one perceives? What is perception at all? What is awareness of what the unconscious? To find answers, the students were given background information on topics such as the history of dream interpretation, brain research, the archetypes of C. G. Jung, non-dualism, the art of schizophrenics, and Indian mythology. In speeches they gave on their findings to the group and discussed different approaches around perception, transcendence, people and the world as well as awareness.

EEG measurements
Dr. Pröeckl and Dr. Winkler have found that the brain can achieve similar states during exposure to Lucia No. 3, as the brains of people in phases of deep meditation. Through the phenomenon "paradoxical arousal" one can be (during the session) deeply relaxed and wide awake at the same time. The same occurs during a ‘light travel’ to achieve relaxation but at the same time stimulated by the many psychedelic experiences. We see then the world through different eyes, expanded its focus. This particular excitation state may allow creative solutions.

During my 15 years of teaching practice, I have no project seminar with comparable results, conducted in both quantitative and qualitative terms. Never before have students so enthusiastically responded continuously throughout the semester.

As an example here are three statements from students to their design process:
Susanne Arndt, 22, Communication Design 6th semester
"I was so impressed after a short test session of the shapes and colors that I wanted to continue sessions. In the second session with Lucia, where I saw a five-eyed beings, I then came even directly the idea for my project: I have photographs with various mythological illustrations combined. Of course there are already similar motives, but the approach was completely new to me. After a half-hour light-session, I could sit directly and record my ideas without thinking about it - that was not possible before. "

Amelie Heirichmeyer, 23, Communication Design 6th semester
"Since then I sat down a few times before Lucia, I am interested in one of subjects like psychology and quantum physics. I generally feel that I am not only become free when drawing and brainstorming, but also in my entire thought process. In my photographs I have deities in different cultures dealt with the light. The color combinations and patterns I have seen during the light-experiments were for me always the starting point of the images. Then I just sat down and drew, the whole thing has developed an incredible momentum. "

Caroline Hagenau, 23, Communication Design 6th semester
"When one speaks of the experience with Lucia, people often believe it is esoteric nonsense. To be honest, I could not really imagine before the project how this lamp would function. Accordingly, I was overwhelmed by the imagery that I have seen. When drawing I started very abstract shapes in black and white, which then become very organic colorful pictures. I was impressed especially that one no longer needs the machine after a few sessions to develop new ideas.