WRITTEN BY DR ENGELBERT WINKLER
Neuropsycholysis is a natural process which can be experienced and observed on the physical and psychological levels and promotes sustainable self-exploration through altered states of consciousness.
In our joint work with light we developed  an entry point to the applicable principles which underlie any effective therapy and which can therefore be combined with various approaches and yet far exceed the definition of a therapy.
While the focus here is light stimulation, what is more essential is the exploration of the “inner” worlds through the adventurous spirit of individual light journeyers. ...NEW - for the first time myself and Dr. Dirk Proeckl presented the concept "Neuro-Psycholytic Light Experience" at the festival "science + fiction" in Basel on May 6, 2018.
During the panel discussion, I emphasized the light travel with Lucia N°03 as a safe alternative to hallucinogen substances. However, one can not estimate the effect of the substances in advance. At the workshop "Heliotropic Breathing", on the other hand, the interplay of light and breathing technique was fascinating the participants.
www.scienceandfiction.ch

Only self-awareness can bring understanding to Lucia N°03.
At the festival, we accompany curious people who want to reach immediately an altered state of consciousness. Through the patented and internationally awarded meditation lamp Lucia N°03, this succeeds immediately, legally, without psychedelics.
Thereby lingering in the carelessness and beauty of an eternal NOW is the essence and aim of the hypnagogic light experience, which becomes the archetypal art experience.
In the unity of experience and creation, viewers become artists of their own, in constant flux art.
Neuropsycholytic Workshops
On a neuropsychological basis, complex processing mechanisms take place during the light experience. These cause among other things colors and shapes to be perceived in a constant state of change. Beyond that, adaptation processes appear, which take place primarily in deeper regions of the brain and run primarily via rhythm or impulse in the nervous system and their interaction with the recorded rhythms of the environment in the sense of interference.
A special, functional nerve cell group plays an essential role in the processing of rhythms (and therefore also the internal change of form or perspective). The pineal gland is also integrated in this group. This allows for example the adaptation of the circadian rhythm to the planetary 24-hour rhythm; mediated by the hormone melatonin. Interestingly enough, there are other naturally occurring hormones in the nervous system which have psychedelic effects such as DMT (dimethyltryptamine) which is also found in the pineal gland. This also offers an organic explanation for the transcendental effect of light impulses. If one examines brainwaves under the influence of Lucia N°03 more closely, one encounters another phenomenon, namely the harmonisation of frequencies or “harmonics”. These can also be recorded during deep states of meditation which we experienced for the first time at the Breaking Convention 2011 when we presented our data for the first time. Accordingly, light journeyers reported feeling increasingly more balanced after a session. 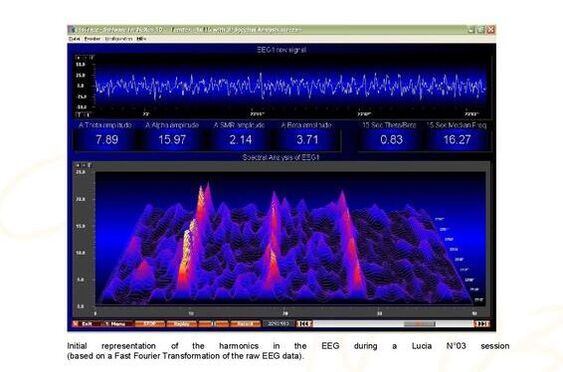 Both under the influence of psychedelics as well as through light stimulation, the activity of some such systems is downregulated. They are made more receptive to change, then made stronger again and enriched with new information and connections. This also occurs following the independent inner rhythms that give our ordinary consciousness its flexibility: namely, the capability to let go of preconceived notions and expected solution paths in order to allow others in. And this can be trained through the use of Neuropsycholysis